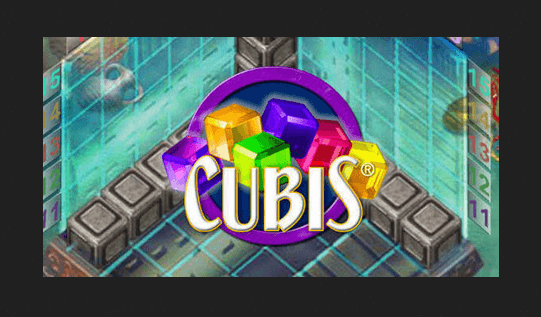 With Cubis slot, CryptoLogic, the Ireland-based game developers now owned by the Amaya Gaming Group, has produced a quirky game that turns slots play on its head. Traditional reels don’t feature at all. Instead, the Cubis playing surface features a cube open on three sides, with glowing, semi-transparent cubes in a range of rich jewel tones stacked 5X5 along the floor and two back walls. The paylines track these cubes in straight lines, vertically and horizontally, either across the floor and up the walls, or from one wall to another. There are thus 15 paylines in total, and the object of Cubis is to get four or more matching cubes anywhere along a payline, even if these lines turn the corner from wall to wall or wall to floor.

Absorbingly Different in All Respects

Cubis slot is aimed at the slots player on the internet looking for a new take on some old themes, and the unique features of its game play are what hold the player’s interest. Set against the bright, clean lines of the Cubis playing cube, the background presents a soothing counterpoint of relaxed nature scenes. Players have the added option of freezing the backdrop on one scene, or letting a variety play out in the background, while they focus on the falling cubes.

Players can vary the number of paylines they bet on, as well as the bet per line, to suit their means. Every time they hit play, the cubes disappear, to be replaced by 75 new cubes falling into place. Any cubes in winning combinations then implode, allowing new cubes to drop into place and possibly add another win to the spin. In effect, every win gives a free spin. This continues as long as winning combinations show up on each free spin; a pattern with no wins in it ends the spin, and adds the total win to the player’s balance. 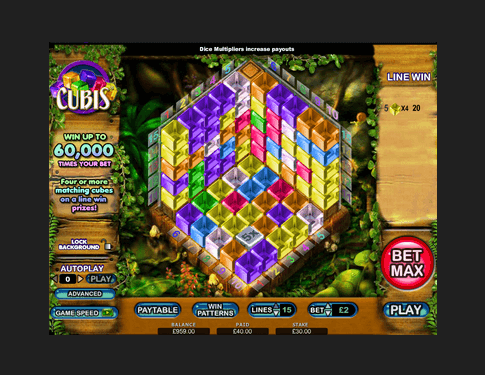 Cubis prizes increase according to the number of cubes in a combo, with a maximum of 10, as well as the colours that create the combo. Yellow has the lowest value, followed by orange, red, purple, blue, green and diamond. A payline of 10 diamonds wins 4,000X the line bet.

Cubis slot does not have a bonus game as such, although as has been mentioned, every win triggers another free chance to win again. But it does offer four bonus features that increase win values. The Wild Dice, which has a different multiplier at random on each face, can substitute for any other cube colour. If it appears and helps form a winning combo, the line win is increased by whatever Wild Dice Multiplier is showing on the Wild. The Line Bomb is a cube that explodes and wipes out all the cubes in four straight lines. This increases the number of new cubes in the resulting drop, again increasing the winning potential. A Square Bomb takes out all the cubes on the entire wall or floor it lands on, and the Nuclear Bomb clears all the cubes on the board, with appropriately explosive win possibilities.